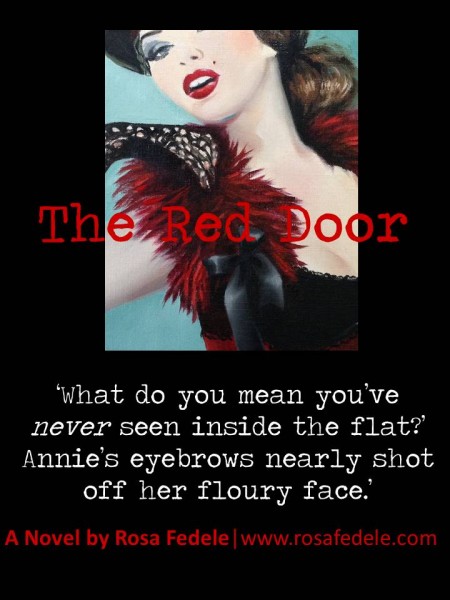 ‘Break into Number Three. Well, it won’t be breaking in, not technically. I’ve got a set of keys to the flat. Let’s wait till he goes out, and let ourselves in’.

‘To see if he has anything about the Billah girls around. Photos, anything …’

‘But you said he never goes out?’

‘Well he’s got to, sometimes. We’ll just have to keep watch.’

‘You must promise to come with me. I’ll start keeping an eye out for his movements.’

Annie and I sprinted across the gravel courtyard – well, I sprinted; Annie’s gait was more of an elegant canter – and let ourselves in through the front door, pushing hard to close it behind us against the wind. Stamping our feet on the large doormat, we both glanced up the stairs with apprehension.

‘Are you sure he’s not home?’ Annie whispered.

‘So what are you expecting to find?’

I had been keeping a close watch on the red door every day. It puzzled me that Billah so rarely left the premises; it was like the futile wait for a Mauritian dodo bird to reveal itself, and finally, that afternoon when I paused to make tea, I saw the door open and a black umbrella pop out. He plodded down the path and out the gate, his upper body ensconced by the enormous umbrella. The stumpy trousered legs were definitely his.

Now we started up the timbered stairs. Annie stumbled on the first riser.

‘Bloody hell, it’s freezing up here,’ Annie rubbed her hands briskly up and down her arms. ‘Why is it so dark?’

‘Stop shushing me. He’s not even here!’

I peered out the front window, the runnels of water against the glass distorting the street view, to make doubly sure my neighbour wasn’t headed back in. Outside, currawongs noisily celebrated the invigorating showers; however no sound penetrated the carpeted vestibule. Even the low growl of passing cars was muted. The whole gallery was shrouded in a melancholy twilight. Behind me, Anne’s panting and wheezing was making me squirm. She mumbled and muttered incoherently.

‘Stop breathing down my neck!’ I hissed over my shoulder. ‘You’re freaking me out.’

‘I’m not breathing down your neck, I’m over here,’ she replied indignantly, as she stood examining her stubbed toe at the other side of the hall.

As I approached the door of Number Three, my heart began to trip with anticipation. With a deep breath I inserted my key and turned it to the right. It moved a fraction, and then stopped. I jiggled it again; tried to turn it to the right, then to the left. Nothing.

‘Oh, the little bugger,’ I breathed. ‘He’s changed the lock.’

‘No, we’ll try the balcony doors. At the back.’

‘Can’t believe I’m doing this …’ Annie grumbled as we let ourselves out through the double French doors at the rear of the hallway. The panels were original, each half barely narrow enough to fit through, and seldom used. The wind rattled and shook the flimsy glass.

‘Hold the doors, Annie, so they don’t slam.’

The balcony was empty and apparently never inhabited. Billah seemed to have no interest in outdoor furniture or ornamental plants. He didn’t even own a barbeque. Cobwebs collected on the lace fretwork and drifts of dead leaves mouldered in the corners. The balcony doors of Number Three were locked, of course. I tried my key again with no success.

‘He’s coming up the stairs!’ She hissed urgently, flapping her hand.

Before I had a chance to answer, Annie stepped out onto the balcony, pushed the curtains in and pulled the doors closed with a click.

‘He’s back. We have to hide! Come on!’ She ran to the other end of the balcony and crouched down. I strolled over and squatted beside her.

‘Annie. We have a problem.’

‘I don’t have keys for the doors. We’re locked out.’

‘No!’ Annie glared at me reproachfully.

‘Don’t look at me like that,’ I protested. ‘I never got these doors replaced. They’re the original ones. They didn’t have a key.’

We waited, expecting Billah to investigate. The southerly winds lashed the rain onto the balcony and, although we tucked ourselves as tightly as possible into the corner, within minutes we were soaked. Annie started to shiver.

‘Can you ring your tenant in Number Four to let us in?’

I thought quickly. ‘She’ll be at work.’

‘What time does she normally get home from work?’

I looked doubtfully at the branches of the massive she-oak swaying tantalisingly just centimetres beyond my fingertips. Then, I leaned over the balcony. Annie came up beside me and we both looked over and sighed despondently at the six metre drop.

‘No. Definitely not,’ Annie answered my look. ‘We’ll have to knock on his door and get him to let us in.’

‘What will he know? It’s your building. Tell him you were inspecting something on the balcony.’

I walked as casually as possible to the eastern end, Annie close behind, and knocked on his balcony door. My hair blew into my mouth as I called, ‘Mr Ahsan, Mr Ahsan? Hello?’

He pushed the curtain aside just enough to peer out at us both, drenched and windswept, a suspicious expression on his swarthy face. Then, he held up his forefinger as if to say ‘one moment’ and disappeared. He re-appeared as the French doors from the hallway were pulled open.

‘Thank you, Mr Ahsan. We got stuck on the balcony. I don’t have keys for these doors. They’re over a hundred years old, you know,’ I babbled.

‘Is there a problem out here?’ He peered around us.

‘No … just checking something.’

‘What?’ His eyes were flickering about, inquisitive and disbelieving.

‘Where?’ He glowered contemptuously at our sodden clothes, clinging wet and transparent to our bodies. His lips were pursed distastefully beneath his heavy black moustache. He was looking pointedly at my chest; my thin silk bra did nothing to hide my breasts, goose pimply in the chill temperature.

‘Wasps are not active in the winter; it will be a good time to remove it.’ He turned on his heel and left us, his front door clicked firmly behind him.

We tumbled back into my kitchen, clinging to each other and giggling madly. ‘Oh my God, I don’t believe what just happened!’ Annie was cackling and twittering with nervous relief. ‘Can you believe what we just did? If anyone could see us!’

After I made a pot of hot tea and we had calmed ourselves, Annie observed thoughtfully, ‘You’re right, you know. He does make you feel uncomfortable.’

‘I know!’ I nodded vigorously in agreement. ‘Like we’re beneath him. He’s so, what’s the word … disdainful. His eyes pierce straight through you.’

‘He was completely undressing you,’ Annie added. ‘And not in a nice way, either.’

Neither of us needed to mention he had once again managed to avoid admitting me into his apartment.