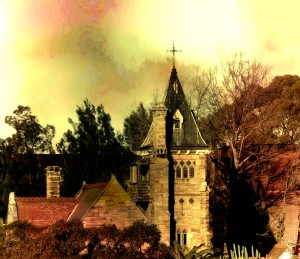 A tidbit for you, lovely readers, from the new book – raw and unedited.

“Never again was she able to look at a sparrow in the garden without a faint sickness in her stomach, without remembering the taste of its flesh.

It had been a game, she thought at first. A game, involving a cage built of wood from an old orange crate and leftover wire netting from the chicken coop. A game, which entailed her lying prone on the ground and waiting – for hours – or so it seemed to a seven year old. It was a game … and a test. A test of patience, a test of silence.

Obediently, she had rested her hand, motionless, on the end of the long string attached to the short stick which propped up the trap. The ground had begun to cool, for by then the afternoon sun had passed over, and the rough grass prickled and itched against her bare legs. A cramp started to set in her shoulder, but she dared not move. Not during the test of patience and of silence.

The bird swooped down, unmindful of the human child poised behind the wall of runner beans. Pert and alert, it hopped towards the cage. It stopped, head tilted to one side. There! The tasty crumbs from the two day old pane di casa, delicious! Hop. Hop. She held her breath. ‘Go inside, pretty little sparrow,’ she urged silently, ‘Hop, hop.’

She could feel his presence as he waited at the window, arms crossed and a wilted yellow cigarette drooping from his lip. ‘Come, pretty sparrow, do this for me,’ she begged silently. The bird paused beside the stick, head on one side, considering. Only a few centimetres, just a hands-width, no more. It sprang once again, drawn by the white morsels and in one smooth movement she yanked on the string, dislodging the prop, and the cage came down. The fluttering began, frantic and frenzied, as it threw itself against the sides, battering the wooden walls with its tiny wings, grey-brown feathers pressing urgently against the wire in its bid for freedom. Its twittering was painful to hear, but she sat beside the cage and spoke quietly to the creature, comforting and reassuring words, she thought, until eventually the sun dropped behind the fence and the yard was shrouded in shadow. Her hands reached through the wire and stroked the bird gently, her fingertips learning its smooth feathers, its quivering skin and beating heart. Skittle, she named it, Skittle the Sparrow, and childishly began to plan which ribbon she would place about its neck – a blue one, she thought, for she was sure it was a boy sparrow. And it would live in a splendid cage and be spoilt with tidbits from the pannettone in the cupboard, and would soon learn to perch on her finger. The creature eventually quietened. It didn’t touch the bread, but cowered in the corner of the box, quivering.

Her father wandered over. Dragging on his cigarette, he stood and watched them thoughtfully. She imagined he was contriving how to adapt the little trap into a birdcage, perhaps make a pedestal for it from old timber and twist an old coathanger into a makeshift swing – he was clever like that – he had a knack for making, for devising, and his hands were deft and capable. He bent over and peeled back a small hatch he had fashioned into the wire and dipped his hand into the cage. Swift and sure, his fingers closed around the creature and lifted it out. She rose up onto her knees and cupped her hands, expectant and keen to receive her tiny, new companion. But, with one movement, he grasped its body and wrenched its head, sharp and sure. She heard the crack, as its little neck broke.

She could hardly remember what happened next; there was sure to have been tears, for she was an emotional child, but she could remember what came after – sitting at the kitchen table, green Formica and a loaf of bread, pasta in a bowl and mismatched knives and forks. It was her favourite plate, the one with the dancing maidens around the edge, their full skirts swirling and garlands of flowers threaded between. And the bird was presented upon it, de-feathered and charred. Its head was still intact and its legs drawn close to its body, delicate toes curled up in a ball. When he parted the chest cavity with the sharp knife, she could see the tiny organs – the little heart which, until a few moments ago, had beat so furiously. The flesh, which felt so firm and warm and springy beneath its feathers, was grey and gamey and she chewed dully on the shred that was forced upon her. The beak was open, a lump of blackened tongue inside, and the sparrow’s blistered eyes stared reproachfully back at her.

She ought to have learned, there and then, not to grow too attached to that which she loved – not objects, not animals, not people. It was pointless. It would all be wrenched away and lost, sooner or later.”