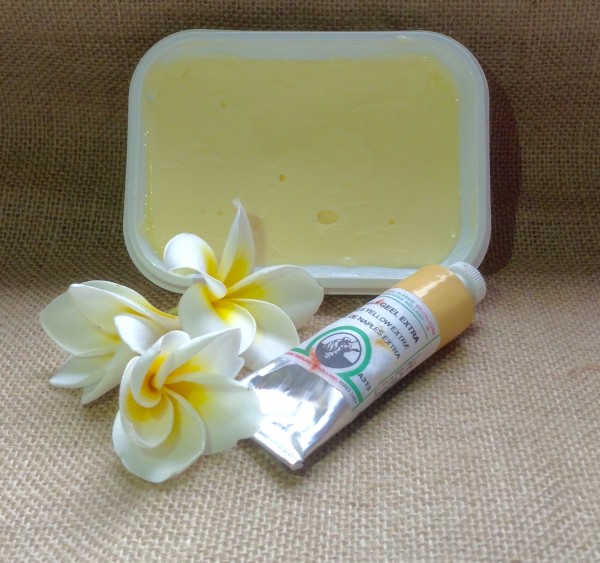 “Pale yellow is the colour of betrayal and deception.” – Degas

“The door of the cottage was painted pale yellow.

She would have called it a “nearly Naples Yellow” – not the Naples Yellow that was made by Winsor and Newton, the pigment just wasn’t rich enough, or Archival Oils, which was far too raucous. No, it was definitely the Naples Yellow made by the wonderful Dutch paint makers, Old Holland. Smooth, creamy, almost buttery, she couldn’t help but raise her hand and touch the wooden surface to run her finger down the paintwork, almost expecting it to indent under the pressure, as would a pat of cold butter.

‘Y’know, I love the colour of your front door,’ she said.

‘I re-painted it just a few years ago,’ I smiled. ‘I must admit though, I still feel a bit guilty about it. Grandmama hated yellow, you see.’

In fact, Grandmama refused to have anything in the house which even resembled the colour – no sand or saffron, no bunches of sunflowers or daffodils. Even the lemons were stashed deep within the vegetable drawer of the fridge.

‘What a horrible thing yellow is,’ Grandmama would decry loudly. ‘Degas once said: “Pale yellow is the colour of betrayal and deception!”’

‘What I think it was, though,’ I confided, ‘is that one of those painters she used to gang around with – most probably one of the fellows from Julian Ashton’s – must have made a comment at one time or another; a sweeping proclamation by Sidney Long or Joshua Smith, likely blurted out in a drunken haze and with no basis to it whatsoever. And it stuck in her head and refused to budge. Grandmama was like that, she became fixated with those she idolised.

‘But Norman was the one she really loved. She talked about him till the day she died. But he didn’t love her – he loved his wife Rose, always had. To him, Grandmama was only a model; a beautiful and voluptuous creature to adorn with headpieces and filmy gowns and feature as part of his tableaus. The only thing he loved about her was her breasts!’ I laughed. ‘He was quoted as saying, “She had the loveliest breasts I ever painted, and they drove me to despair. No crude combination of colour extracted from the earth can hope to capture the pearly shimmer of light on her youthful feminine breasts.” Norman Lindsay loved all his women, but she wanted him to only love her. In the end, it was he who drove her to despair. Poor Grandmama.’”